You are not connected. Please login or register
Go to page :

Liviforever wrote:Gulp, Durnford getting even more concerned about Talbot signing for us.

Good luck Jacko, looked daft as a brush off the pitch and a great lad to have around.

Has that been confirmed? I mind when it was getting talked about, the guy's brother was going nuts on Twitter saying it wasn't true

Hmmm... Was sure it was on Callum Carson's twitter; can't find anything now.
Bertie Bassett

Yeah, can't say I remember anything about a Hibs youngster on a PCA. I think you're going senile D.

Have you ever been to Egypt?

Great that Byrne has signed; Jacko going is less impressive but a bit like Mullin he wasn't really getting regular game time & is defensively deficient; Tannadice springs readily to mind.

Interestingly the Pars also signed his brother, so that may have helped sway him away from us.


Can't imagine we'd go back in for Talbot. I liked him but he is too easily sent off.
Troy

Great news about Sean Byrne.Was a bit worried when the rumours started flying around that he might have been going elsewhere.Still getting over the Hoppy situation but the club seem to be doing their best to appease us.Will genuinly miss Josh and Jacko and i really hope it works out for the both of them at their respective clubs as it it did for them while they were here.Without seeming greedy here i really hope Craig puts pen to paper when he gets back from his hols,would give us a helluva boost with that back three going into the new season oh and a new gaffer asap please wouldnt go a miss.LOL T.
cptn_hooch 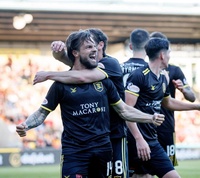 Bertie Bassett wrote:Yeah, can't say I remember anything about a Hibs youngster on a PCA. I think you're going senile D.

Have you ever been to Egypt?

Great that Byrne has signed; Jacko going is less impressive but a bit like Mullin he wasn't really getting regular game time & is defensively deficient; Tannadice springs readily to mind.

Interestingly the Pars also signed his brother, so that may have helped sway him away from us.


Can't imagine we'd go back in for Talbot. I liked him but he is too easily sent off.

I'm sure I remember the name Callum Crane being mentioned but nothing confirmed. Wouldn't mind Talbot back on a free as a squad player.
Liviforever

Yeah I don't want to seem as if i'm slagging him off but Jacko wasn't a key player for us, didn't help that we played with a back 3 and switched things around between wingbacks and wingers, sometimes Rafa was being used to defend and attack, prob was a bit better defensively than Jacko too.

I'm sure it was EdinLivi that mentioned the Hibs player coming to us, haven't seen anything official on it though.

So far everyone I regard as key players except Halkett has shown they are staying, some signed earlier but their contracts will need renegotiated and some are on PCA's as I read on our OS that the transfer window is closed just now, and is open again on 9th June (iirc), but I doubt they'll do a Clum and screw with us, these guys are honest players on and off the pitch

The way we are following Jordan Thompson on twitter wishing him well playing games for Ireland I think we're looking to get him signed too. Interesting too that Frizzell, Thompson and Ryan Hardie are still up on our players page on the OS, Mullin and Longridge have been taken off though, and our new signing are already up too. Would be fantastic if we signed Hardie back up.
Bertie Bassett

Callum Crane is not a name I remember hearing... maybe its me that is going senile!

I saw his name mentioned over in the Den earlier & checked out wiki to find he is a LB so clearly D has heard something about him. Apparently he was on loan at Alloa.
Durnford

I believe Halkett and his family should return home from his hols today....
LiviLion

Apparently Liam Kelly set for a return, only a permanent one this time. It's the Daily Record so obviously take it with a pinch of salt but they've said he'll leave Rangers and join us on a 2 year deal "as competition for veteran Neil Alexander"
Liviforever

We def need another keeper, i'd have been bricking it if anything happened to Alexander and Maley took over.
Durnford

Confirmed as signed on a 2 year deal, with more signing news expected over the next week and a half.

So DM may be on holiday but he isn’t idle.
LiviLion

Interesting layout for the squad on the official site; you could read a lot into that.

Note that the Loan statements have all disappeared.
Liviforever

Durnford wrote:Interesting layout for the squad on the official site; you could read a lot into that.

Note that the Loan statements have all disappeared.

I noticed Buchanan is missing.

He went to Morton. Hoping that means Halkett is staying.
Bertie Bassett

Really? Didn’t see anything about that.

Robinson extends contract for another season; good news but I would have preferred it to be two.
Liviforever

If he stays injury free he'll be an important player for us, has plenty of goals in him.
Liviforever

Bertie Bassett wrote:Really? Didn’t see anything about that.

Robinson extends contract for another season; good news but I would have preferred it to be two.

Left St Mirren to get more game time with us but wasn't getting into our back 3 over our main 3 defenders, looked decent enough whenever he got a game though so should do well at Morton.
Liviforever

So confirmed signings to date we can field a starting XI of;


Aye it's fair to say we need a few more signings yet.
Bertie Bassett

Another new signing announced... Ricki Lamie (another defender) & a "teaser" that there might be more news tomorrow on the Twitter feed
Liviforever

Sounds like a defensive upgrade from Longridge, things are shaping up nicely. Just need Halkett to sign up now, and a right winger & a couple of strikers. Still hoping Hardie is going to be announced one of these times.
Bertie Bassett

Halkett & Hardie would be exceptional business.

Both would be first choice players here; they wouldn’t necessarily be that at most other clubs in the top flight.
Liviforever

Yep a good season with us in the Premiership would set them up to walk into a starting place at their next club, maybe be taking less pay for a season but it would get them the bigger move and more pay the season after, they're both young guys with plenty years ahead of them.

Interesting bit on Kenny Miller in the papers, seems more intent in playing than going into management, but wants to do that in a couple of years time, or as a player/manager. Aberdeen, Hibs Motherwell and a few other clubs are after him but maybe we could tempt him to come to Livi for a season or two as a player and also coaching our strikers, which would led to a management post.
forzalfc

That's Callum Crane confirmed on a 2 year deal.. makes me think Cadden could be on the way out
Sponsored content