This will be a tricky one, if we can defend well then I think we can win this, Aberdeen are scoring goals now and Stevie May is a real handful, but they're also conceding a few, going to be a tough game for us defensively, hopefully we can keep them out and get a goal or three at the other end.

Would really like to beat them after the way they got a late winner up at Pittodrie.
Bertie Bassett

Yes, it will be tough; hopefully their 7-goal thriller has taken enough out of them to give us the edge, especially with a relatively early substitution of Hardy against Dundee.

Anyone know how they usually do on plastic?
Troy

We usualy manage to raise our game against the big teams and i sincerely hope that tommorow will be the case again.Think the pitch will be a leveller for us and i hope we can take advantage on our home patch.Would agree with Orcos hopes in that id take a point from this game although im sure the boys wont have that on their minds.Anyway another big crowd at the Vale and i just hope the Lions do themselves justice here.Cmon Livi,you can do it.

Only way i'd be happy with a draw is if we were 2 or 3 nil down and came back to get the draw. Celtic are the only team I've no confidence of us beating, mainly because they're the only team that we have never won a game against, the rest are there for the taking, esp at home. So come on Livi, lets go get the 3 points and put some pressure on Hearts and St Johnstone for a top 6 spot.

Bertie Bassett wrote:Yes, it will be tough; hopefully their 7-goal thriller has taken enough out of them to give us the edge, especially with a relatively early substitution of Hardy against Dundee.

Anyone know how they usually do on plastic?

Only played one game on plastic this season and that was their win against Killie.

Think the busy Dec schedule caught up with us the last couple of games, just couldn't keep up our usual intensity in the 2nd half today and lost a lot of 2nd balls. Keaghan was a big miss too, as has been Lamie since his injury.

Think we shaded the first half though and Pitts might have got us a goal when he was running in on goal, 2nd half Aberdeen were looking the likelier side to get a goal but still pretty scrappy goals for both teams. We also left ourselves wide open for the counter attack for their 2nd, and we knew Aberdeen had the beating of us for pace down that wing.

Disappointing end to the year but still a tremendous effort getting us almost safe going into the winter break, prob only need another 6-8 points I reckon. Still well in contention for a top 6 place too, recharge the batteries and get everyone back fit and we'll be good to go again.

Only fly in the ointment Liviforever is the January window. I'll be biting my nails for a month hoping we hang onto our key players.

Fear not Orco, after today’s performance no one will want them

Steve Bruce & his son were at the game today. He is between jobs at the moment but strongly tipped for the Sheff Wed job.

Seriously though... I thought a draw would have been about right; we were exposed for the 2nd but got very unlucky when Halkett’s brilliant block rebounded of Lawson into the net.

The first goal was avoidable too, because Lithgow was very slow at moving forward & played the scorer onside. He was never MotM either, that should have gone to Halkett or Pittman.

The ref was, as usual, worse than useless, missing a couple of obvious handballs & regularly getting decisions wrong (for both sides but mainly against us).
Liviforever

Just seen the pic showing Hardie onside when he ran onto the ball and chipped the keeper, but was flagged offside, fecksake, we just can't get a break with bad refereeing decisions screwing us against Aberdeen. 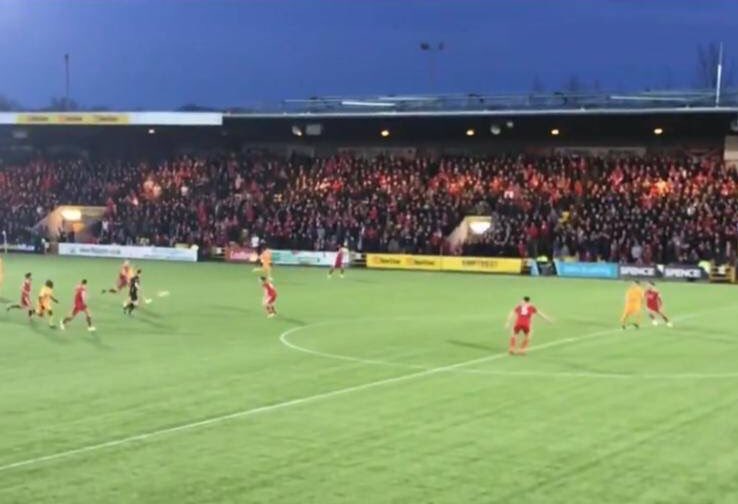 With the late goal at Pittodrie coming from a corner that wasn't a corner and the string of poor decisions yesterday we've been diddled out of 2 points while Aberdeen got 4 extra. They were the better team on both occasions but so we're we when we dropped points at Motherwell and Hamilton.
It's no fair!

Yeah, officials up here are sadly inept, as I said earlier they made bad decisions against Aberdeen too but none that had a direct bearing on the result like the photo shows & the free kick we should have been given but they got a throw in & that started the play that led to the opener.
Troy

Dissapointing result for us yesterday but Aberdeen deserved it imo.It seems the break has come at the right time for us as you could see that having to play so many games in such a short time was catching up on us.Apart from Halketts point blank header we didnt create to many worthwhile chances up front and the Dons defence invairiably mopped up anything we threw at them.Cant complain to much as these lads have kept us in a great position before the turn of the year and i look forward to next year when well see where it takes us.Big shout out to both supports for making it a great atmosphere and to the Dons fans in the Almondvale suite who were terrific before and after the game.Its the busiest ive ever seen it and ive been going for many years.Finaaly i know its early but would like to wish all posters best wishes for the new year and hope next year is as good as this one was.LOL.Troy.