Couple of banana skins in there for us, Berwick and Annan away aren't happy hunting grounds, will give us a wee taster playing Accies though, and Airdrie was a certainty, just can't help getting them.

Reasonable chance of winning the group though, nobody in there we shouldn't be able to beat, and we're a  Premiership team ourselves so Accies are about where we'll need to aim for if we want to stay up, xo  good chance to see how we do against them.

Berwick and Annan at home & Accies and Airdrie away would be good, prob gives us the best chance of us topping the group.
Liviforever 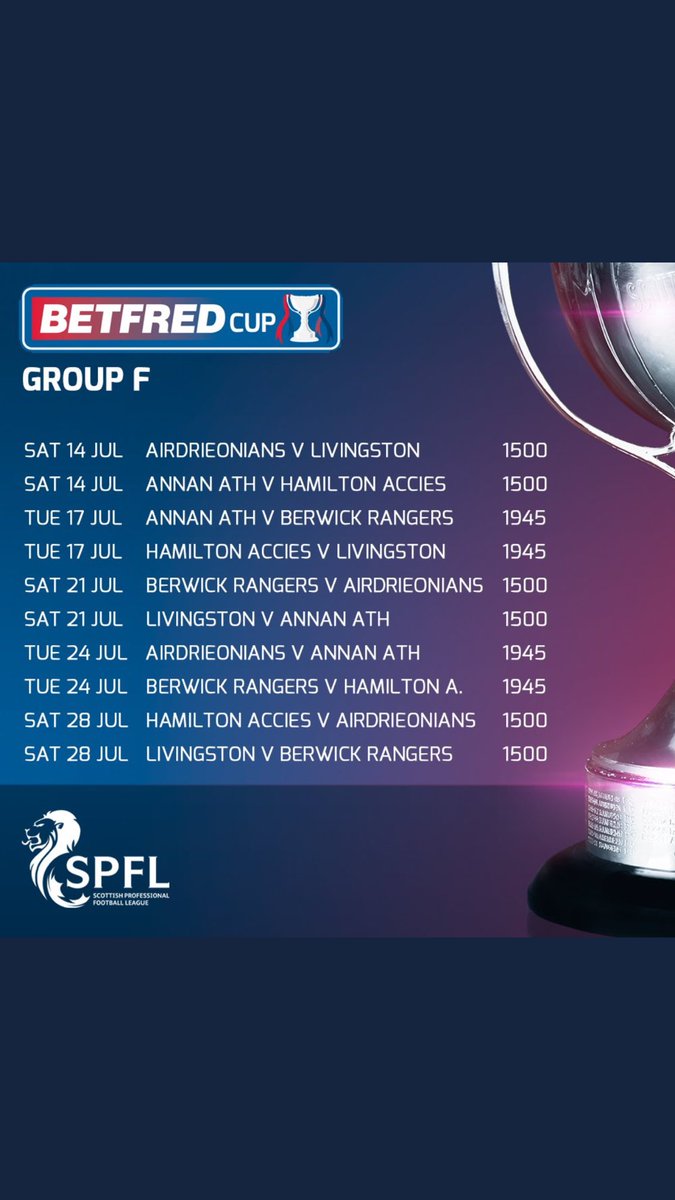 Airdrie and Hamilton away, Annan and Berwick at home, that'll do me. Both away games are close for travelling to and vice versa with the home games.
Durnford

I would have preferred to play Hamilton at home (we probably are visiting them twice this season already - provided we end up in the same sector after the split that is).

Both Annan and Berwick are cracking away days both with good club houses that the away fans are usually welcome into.

Still I always enjoy my trip the Airdrie as well.
Liviforever

Up on twitter our Betfred cup game away to Accies is switched to Airdrie's ground, so we play Sat and Tues at Airdrie for our first two fixtures.
Bertie Bassett

Hamilton's pitch is getting replaced I think.
Bertie Bassett

Yeah, I saw that on their website but could see nothing anywhere moving our game to Airdrie
Liviforever

I hope our pitch will be ready for the new season kicking off, wonder if we'll even play pre season games on it.
Bertie Bassett

Probably why we start with 2 away ties
Liviforever

Looks like another change of venue, for one of our home games this time, that's Accies away being played at Airdrie's ground and our first home game against Annan at Linlithgow's ground.


Gary Maley playing as a trialist for Linlithgow today is, I'm told, a favour to the club. Maley will be Livi's third choice keeper next season and Livi will use Linlithgow's Prestonfield for the Betfred Cup v Annan on July 21 as new 3G surface at Almondvale won't be ready in time

If Maley is 3rd choice who is 2nd choice? Surely not the young keeper?
LiviLion

Bertie Bassett wrote:If Maley is 3rd choice who is 2nd choice? Surely not the young keeper?

We've got Louis Gray on trial, recently released by Everton. Imagine we'll be eyeing up a couple other potential keepers, maybe with a view for a loan.
Liviforever

Well that's us into July, wont be long now till our Betfred cup games.

I think it has worked out quite well for us in the draw, we've struggled away to Annan and Berwick so glad we wont be playing at their grounds, although it looks like we wont be at our ground either, still it doesn't give them home advantage which would be more of a stumbling block.

Playing Airdrie away is no probs, we've gubbed them there about 5 times the last couple of seasons, and getting Accies 3 days later at the same ground should be an advantage, certainly better than playing them at their ground anyway. So venue wise we've done well.

Crighton is playing in League One for Airdrie and Lithgow with us in the Premiership, how weird is that, only 2 seasons ago they were both winning League One with us, just shows how easy it is to make the wrong choices, and right ones in Lithgow's case. Carrick is playing for them too, can see him scoring against us, but to balance it up Cadden loves a goal against his old club.

Looking forward to these games as we don't seem to be having many pre season ones arranged, and I wont be going down to Dumfries for the one we have arranged. So the Betfred cup will give me a chance to watch our team play and see any new players we've signed.
Afro

Playing Annan in Linlithgow will be a nice novelty. Still early days yet but I'd be hopeful Jack Hamilton can get a few minutes over the next four games before potentially going out on loan; would be a great experience for the boy.
Durnford

Liviforever wrote:Looking forward to these games as we don't seem to be having many pre season ones arranged, and I wont be going down to Dumfries for the one we have arranged. So the Betfred cup will give me a chance to watch our team play and see any new players we've signed.

I suspect for at least two of them you'll have to wait for the IronBru cup game.
LiviLion

Someone wittier than me can come up with something for Alan Lithgow beating Annan in Linlithgow.
Liviforever

If I was a betting man i'd def stick money on Cadden scoring in this game on Sat, 3 pre season goals and he absolutely loves scoring against Airdrie, might even see him getting a hattrick this time.

Gallagher didn't score many last season and was put in the shade by Halkett and Lithgow banging them in, but that's 2 in 2 games in pre season, hope that continues into the season when we're playing for real.
djs9750

Have I missed the admission prices for the Aidrie game or have they not been announced yet?
Bertie Bassett

Not seen anything specific to this game but their PATG prices for this coming season appear to be £16 for adults.

Really don’t understand why clubs don’t have prices set where a minimum of change needs to be handed back to make getting thru the gate quicker.

Anyway, as I say, nothing specific to this match just a generic price.

LiviLion wrote:Someone wittier than me can come up with something for Alan Lithgow beating Annan in Linlithgow.

Lithgow rose to header in a goal for Livi at Linlithgow.

Annan other thing... if you make it Alan Lithgow rose to score... it sounds like A Linlithgow Rose to score
Liviforever

Bertie Bassett wrote:Annan other thing... if you make it Alan Lithgow rose to score... it sounds like A Linlithgow Rose to score